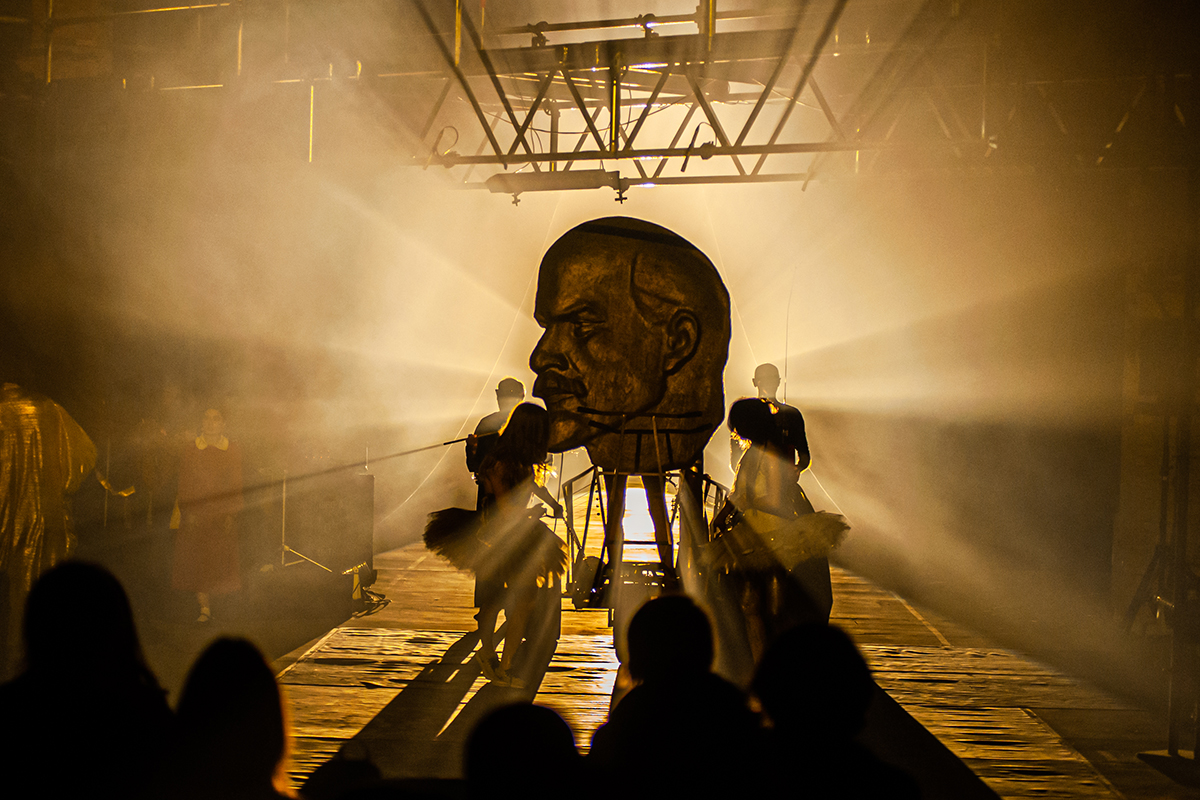 This event is part of the 700th Anniversary of Vilnius Programme. For more information visit: www.700vilnius.lt

The archaeological opera Chornobyldorf shows descendants of humanity who survive a number of catastrophes and find themselves in a world after the death of capitalism, opera, and philosophy. Wandering among the ruins of nuclear power plants, abandoned churches, theatres, and galleries, they try to recreate a lost civilization through archaeological ritual performances. Once again misinterpreted, symbols and signs gradually disappear into the white noise of nature.

Chornobyldorf is a contemporary media opera, where unconventional or prepared authentic musical instruments (microtonal bandura, dulcimer, alpine zither, harp, kantele, morin khuur, algorithmic piano), folk and classical singing are combined with physical theatre, dance and video novels. Musical language of the opera relies on the synthesis of Dnieper – Danube basin folklore, microtonal music and deconstructed quotations of classical and romantic music. Seven parts of the piece are connected through video episodes, which act as portals transferring into certain times and locations – these recordings were captured during archaeological expeditions to Chernobyl’s prohibited zone and Zaporizhzhia nuclear power plant near Dnieper River. This year, these places became targets of Russian military and their seizure poses great danger to the whole world.

The piece was premiered in October 2020, long before Russian military invasion, which turned the opera’s speculative dystopian futurism into shocking reality.

Archaeological opera Chornobyldorf was created two years before a large-scale Russian war against Ukraine and it is now that the opera has become radically relevant. In 2020 a nuclear explosion had an abstract meaning to us, whereas today the fear of nuclear threat is well-founded. Each day, the fictional world of Chornobyldorf is getting more real. The context of the piece changed for both its creators and the whole world.

We have created Chornobyldorf during the pandemic. It is a fictional story about post-apocalyptic society: about people who have survived the catastrophe – their life, beliefs, rituals and art. In two years’ time, the hell of Russian barbarism fell upon Ukraine. Taking into account the actions of the war caused by Russia, we are even more willing to speak about Chernobyl as one of the crimes, an act of human genocide carried out by Soviet Russia in the land of Ukraine. At the same time, it is a glance into the future, a hopeful story, which asserts us that nature can survive and correct the horrible mistakes of humanity.

An overwhelming, surprising archaic, as well as contemporary artistic vision… It’s a real spectacle which combines a wealth of rituals, visuals, movements and sounds… The gravitational force of the production pulls the audience in to its own world and at the same time invites for individual reflections about the state of society.

That new way of speaking demonstrated by the authors of Chornobyldorf reminds of Walter Benjamin’s Angel of History, who rushes forward, but with a face terrified and turned back, to the past. In fact, the opera centres around the memory of the past, which is also a call for the future.

Chornobyldorf is an incredibly talented collective fantasy, and the thing is that you and I are also its co-authors. <…> Cultural gains and losses of other generations leave a mark on the lives of each of us, and shared memories become our own. And how we can grow aware of this is not imposed obtrusively from above, but turns into a shared carnival-mystical experience.