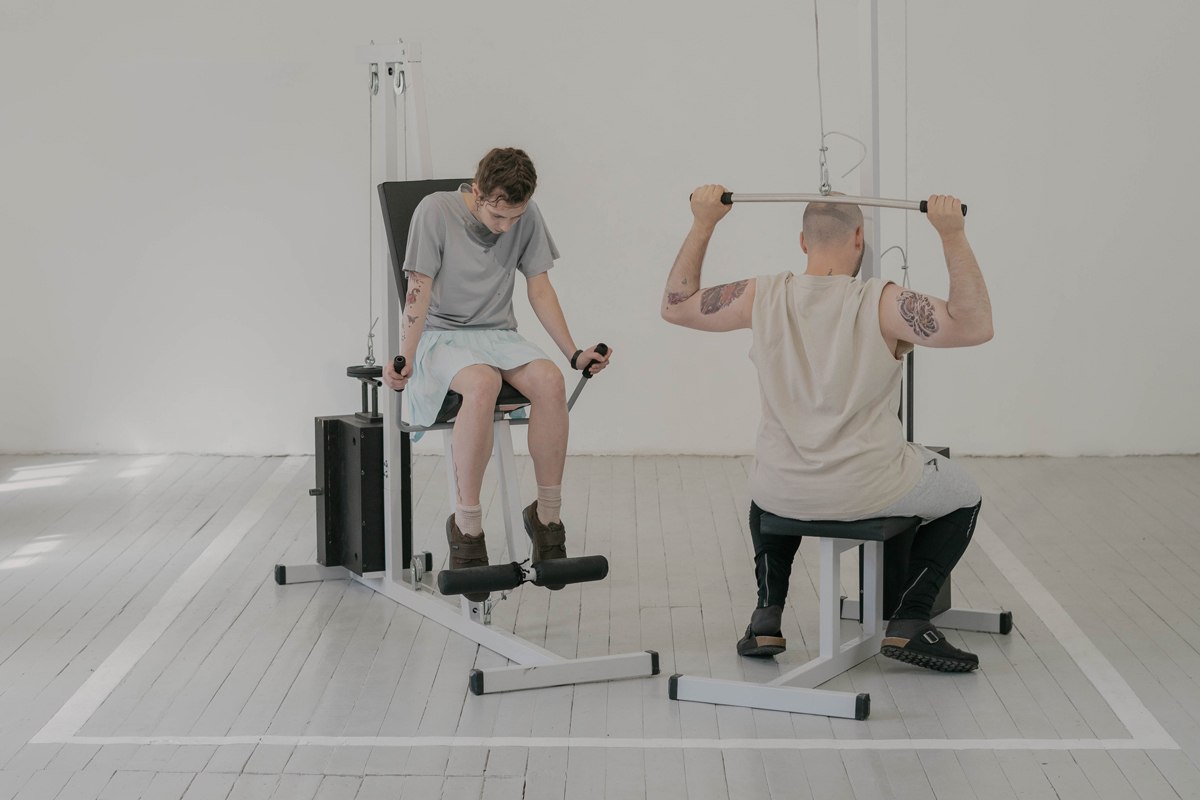 An idea for the musical performance Sports Group was born while playing basketball at the gym. Asynchronous sounds of basketballs hitting the floor, shout outs of the team players – upon closer listening all of these sounds started resembling a large unmanaged concert, and that is how the five-year-long journey into the research of “music through sports” and “sports through music” began.

The piece that evolved from fragments of experiences found in gyms, sports grounds, blogs, vlogs and advertising addresses the experiences of a modern human being within the world that relies on “laws” of self-exploration, self-creation and continuous self-perfection. On the one hand, such extensive attention to individuality, bodily and inner beauty is a sign of the development and high-level culture of the society. On the other hand, when self-realisation is understood as acting, rather than being – perhaps it becomes yet another source of stress and existential anxiety?

The game of the Sports Group fuses diverse rules and imagery of the sports world. Sultry space saturated with trained bodies, their pulsing veins and temples houses an ensemble of six DIY instruments. Variety of gym equipment for diverse muscle groups sound as unique musical instruments.

Libretto of the Sports Group does not have a continuous narrative. Every story represents a fragment of the whole and, simultaneously – a self-contained world that might be apprehended without a context, as an individual song from a complete music album.

Music for the performance was dictated by the unique instruments created for it. Harmonies are unfolded through use of old organ pipes and experimentation led to discovery of new sound production techniques. Aesthetic of sound of the performance was inspired by non-perfection, decay, bias, temporality and coincidence; it balances between spontaneous flow of sounds and tunes emerging from listening to one another.

I had this spontaneous idea to house the action of the performance in a gym-like environment after noticing that the harmonium in my room was somehow similar to the mini steppers used in sports gyms. So, we gradually invented the instruments never seen before, at the same time plunging into a hermetical, yet also ceaselessly active world of trainers and exercise, full of physical and metaphysical sweat.