The Urban Tale of a Hippo 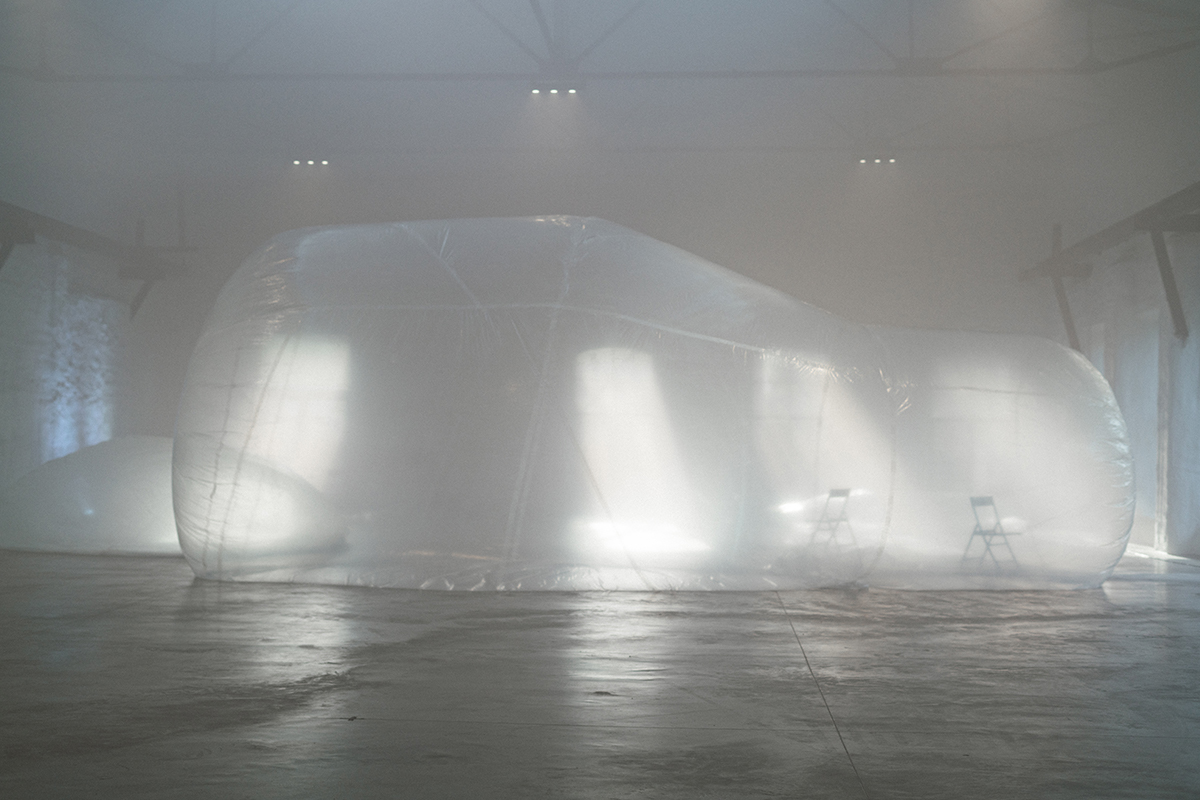 Duration: 40 minutes
Attention: event venue will be filled with mist (vapourised water); drone will be used; seats available only for persons with disabilities; the audience may move around freely after assessing the risk that due to limited visibility encounters with other audience members, musicians or hippos are possible.
No language, no surtitles necessary

The Urban Tale of a Hippo (or Urban Tail of a Hippo) is a musical piece exploring the landscape of contemporaneity and contemplating human and animal identity.

Event will take place at Smoke Factory – a location that extends beyond a mere stage and also acts as a musical instrument, where the sounds expand, transform, grow and cradle the audience. Navigating through mist, the viewers may not only enjoy the landscape, but are also able to submerge into it hiding from the eyes of others. As hunters relying on sharpened senses, they may wander around in space.

Sound environment created by The Urban Tale of a Hippo combines live instruments and electronic music, reflecting the natural and urban acoustic landscape. At the same time – it is a map of fading visions of the past and anticipated silhouettes of the future.

In this performance the material world is hovering as a giant hippo, a totem of consciousness and multiplicity. Eventually… the Hippo itself emerges.

Music for The Urban Tale of a Hippo drew inspiration from texts by Gilles Deleuze and Félix Guattari, especially essay Becoming Animal and A Thousand Plateaus: Capitalism and Schizophrenia. In these texts the authors distinguish three types of animals. The first type is Oedipal animal, it is individualised and sentimentalised. The second type is the Jungian, or “archetype”, animal. This is the animal that has a symbolic presence in the myths, rituals, and spiritual beliefs of many human cultures. The third type is the Demonic animal, fluid and acting subconsciously. Each shift of the piece is related to one of these animal types and relies on the following criteria: anti-hierarchical, growing in a lateral manner with no centre or periphery,having no beginning, middle, or end, and no privileged viewpoint.

The main challenge was to find a way to choreographically present an attractive listening experience to the audience, simultaneously transforming the audience into a choreographic subject. Choreography provides space to the music and focusses the attention, without trying to decorate or illustrate it, without overwhelming or emphasising the narratives encoded in The Urban Tale of a Hippo. While working and thinking in straightforward and, simultaneously, polysemous choreographic means, it was sought to escape choreography as performance, rather presenting it as action. We do not propose a single dominant viewpoint, trying to allow each viewer / listener find their own ways to connect with the unfolding (non)human choreography.

When the mist fills the space, the light reflects everywhere, losing clear direction and target; it does not specify where to look and what to see. Sharp eyesight field of a human eye is only around 2°, while the remaining nearly 360° of the field remain blurred. Even though eyesight in this field is mostly insensitive to details, it is capable of capturing change and movement. Thus, after being submerged into the mist, the view loses hierarchy of objects and one has to rely on their barely visible traces. Field of view does not have foreground or background. Only numerous hints remain. That is why spatial lighting should not be identified with lighting design aimed to create a background or atmosphere. Light does not display the space; it creates the space, sharing it with something else.

Instrumental parts are deconstructed and suddenly they appear as animal or other natural sounds. In this musical performance the composer displays unique ability to combine instrumental material that requires highly masterful musicians with electronics. Such combination demands extraordinary attention and rapid reaction of musicians, at the same time leaving space for the interpretation born “here and now”.

Rough silhouettes dominate the costumes. There are no illustrative, finished characters. To the contrary – new form is sought for that would be authentic for each and every performer (and his/her actions), to originally emerge in space. Monochrome costumes have different covered and open surfaces that appear to have been exposed to the elements. Diverse fabric manipulation techniques are used, retaining the impression of incompleteness, a kind of traces.